I often thought about having a Raspberry Pi and doing all kinds of supercool stuff with it. But it took me until last week to actually get one and play with it. 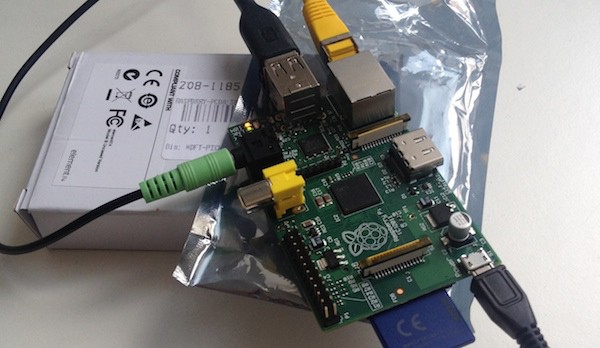 I didn’t want to buy any HDMI cables and decided to run it completely headless, meaning I will use it only over SSH and never connect it to an actual display. After putting Raspbian onto a SD card as operating system, I hooked it up to the network. I did buy a Wifi USB Adapter beforehand, but for the configuration process it’s easier to go with the wire option.

AirPlay was the first thing I wanted to give a shot. It often bugs me that I have to mess around with the cables when I want to use the notebook on my couch rather than on my desk.

Thanks to ShairPort1 that’s really easy and works like a charm with both my MacBook and my iPhone.

ProTip: If you are not alone in your network, make sure to set a password.

The next cable on my desk is the one of my external backup hard drive. Why not doing backups over Wifi? It turned out to be a bit more tricky. There are quite a few tutorials on running using your Pi as full-fledged TimeCapsule.

There are quite a few tutorials on this. One of my biggest problems was that the external drive was always getting mounted as read-only. Turns out that if you don’t eject the drive correctly the Linux driver won’t mount it writable the next time. Although Apple tells one not to do it, disabling journaling seems to fix this problem.

I tried a lot to get TimeMachine accepting my previous backups and continue there. Turns out Mac OSX handles local (= USB) backups way differently than network backups. I didn’t find any way to do so and decided to connect my MacBook and the Pi with a LAN cable directly. After doing the initial backup that way, it’s no problem to change to wireless later on.

Currently the external drive is permanently mounted and powered. I am experimenting a bit with dynamically mounting it whenever my MacBook is in the network.

I stumbled upon GroundControl, a neat control center for the Pi with statistics and the possibility to execute commands. As I am missing a few features I hope to make some time for forking and exiting it a bit.

But for new functionality I don’t know what to do next. If you have got some cool idea, shoot me a tweet.