As a reader of this blog, you might have noticed that I have a distinct interest in headphones. If you happen to be a colleague, you might even be a little bit amused about this foible of mine and how much time I spend on it. In the last post I mentioned that I didn’t had the chance yet to test the Bose QC 35 or the Sony MDR 1000X. This summer their successors to both were announced and long story short: This is a review of the Bose QC 35 II and the Sony WH 1000XM2. 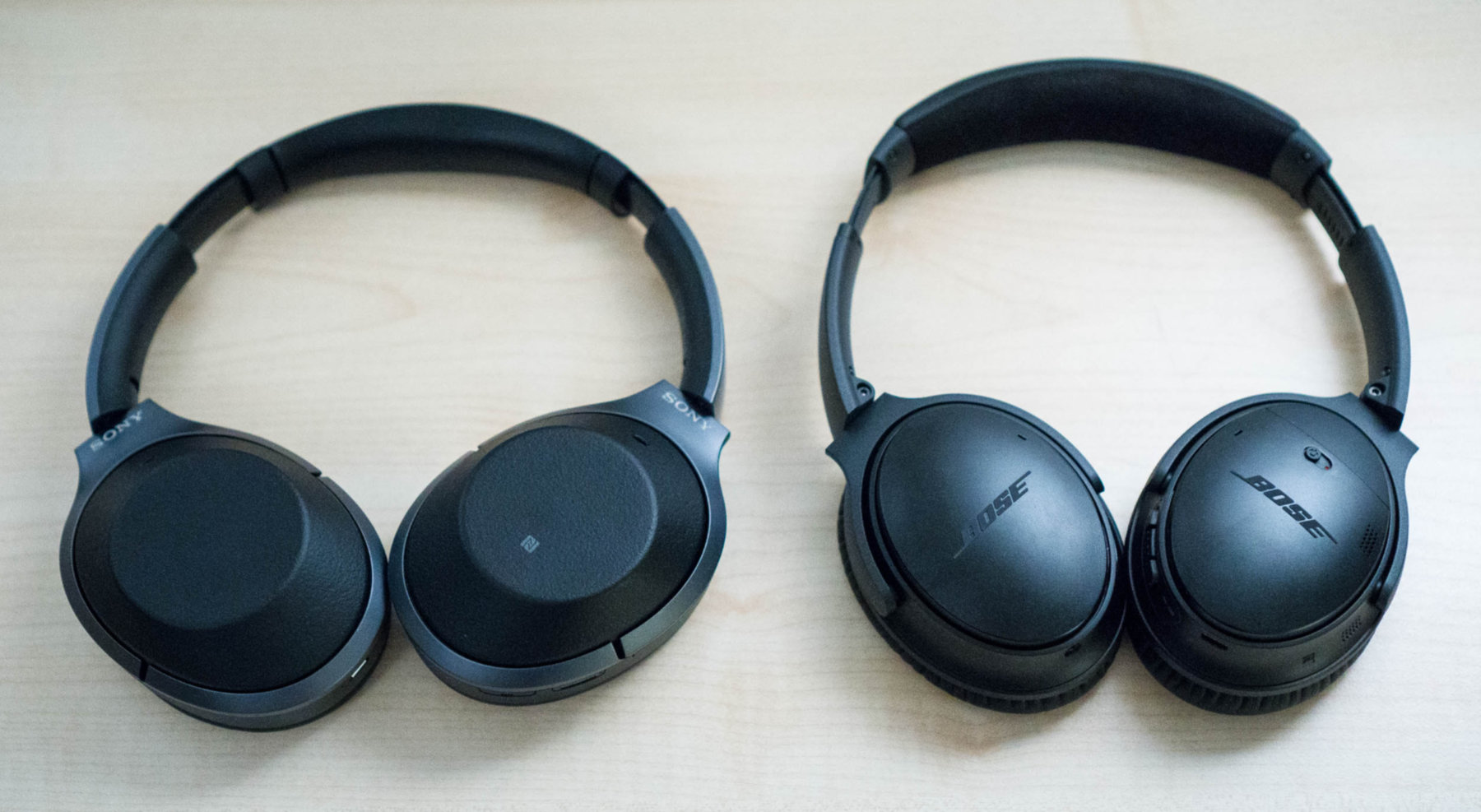 Quick background: I am looking for headphones to use primarily while commuting and at work. They will be used paired to an iPhone and a MacBook Pro. Noise Cancelling is nice when on the train, and phone quality should be okay enough to participate in Skype calls at the office. Before this review I have been using the Plantronics BackBeat Pro 2 SE for almost a year. So this review will compare these three headphones.

Both headphones come with similar cases. On first try the Bose one feels a bit lighter and fragile, whereas the Sony a bit more rigid. Nonetheless the build quality of both headphones is great.

The first time I wore them, I was surprised. I didn’t expect much difference to the Plantronics, but exactly that’s the case: They feel much nicer to wear. In particular there is more space between the ear and the earcups. When using them for an extended period of the time, the BackBeat Pro became uncomfortable as my ear ever so slightly touched the inner of the earcups. This is not the case for these two.

The 1000XM2 feels to sit a bit more tighter on the head already blocking a good amount of sound this way. The QC 35 II is a bit lighter. But without the direct comparison I could hardly notice these difference. Both were very comfortable to wear for 3-4 hours at a time, something I couldn’t do with the BackBeats.

Probably the most important part about headphones: Sound. To me they are in the same league as the BackBeat, probably also because the Apple devices support none of the proclaimed superior audio codecs the Sony supports. And after all neither the bitrate is at a level to satisfy real audiophiles nor is my listening as sensitive to notice.

From a general perspective the Sony set is a bit more on the bass-y side of the spectrum, whereas the Bose feels very neutral. In direct comparison the Sony offers a somewhat fuller sound when listening to music (mostly rock in my case), but at no point it felt like too much bass like Beats headphones. But again I could only notice the differences in sound when directly listening to same track on both headphones back to back. Only when I really intend to listen actively to loud rock music I occasionally missed a bit more bass on the Bose headphones.

I also tested both headphones to use as a headset for calls. I’ve gotten the feedback that the sound of my voice is much better in general than from the BackBeat Pro. Turns out those only recorded with 8 kHz whereas both the 1000XM2 and the QC35 II recorded with 16 kHz. Besides that they were slightly better on not transmitting all the background noise. That said, I’m curious how the Plantronics Voyager 8200 UC perform in this regard.

In general I like Noise Cancelling on headphones but I couldn’t spot any distinct differences when using them in the office and on the subway. But the effect is noticeable and I had NC active most of the time.

I disabled the additional NC features of the Sony (reacting to air pressure and my current activity), because it irritated me most of the time. Also when I’m outside – even with NC enabled – I have them mostly at a volume level where I would nonetheless notice cars honk.

Here comes a general complaint: Even the old Plantronics BackBeat were already able to do multipoint Bluetooth. How can it be that Sony ships headphones without this feature? Especially in my case I would have two audio source close to each other most of the day: I want to enter the office listening to music from my iPhone, sit down at the desk, pause the music from the iPhone and start the music on my Mac.

To make this work with the Sony I would have to switch Bluetooth on and off all the time on either device, or enter the pairing mode on the headphones and the device. The Bose does support multipoint – although that’s also a bit buggy sometimes – and is therefore way better when I know that I want to switch sources multiple times a day.

Another point of interest are the controls: The Sony has touch controls and the Bose relies on buttons. While it needed some time until I figured out all touch gestures and how exactly I had to do them, it was just as easy to use as the physical nobs on the Bose. 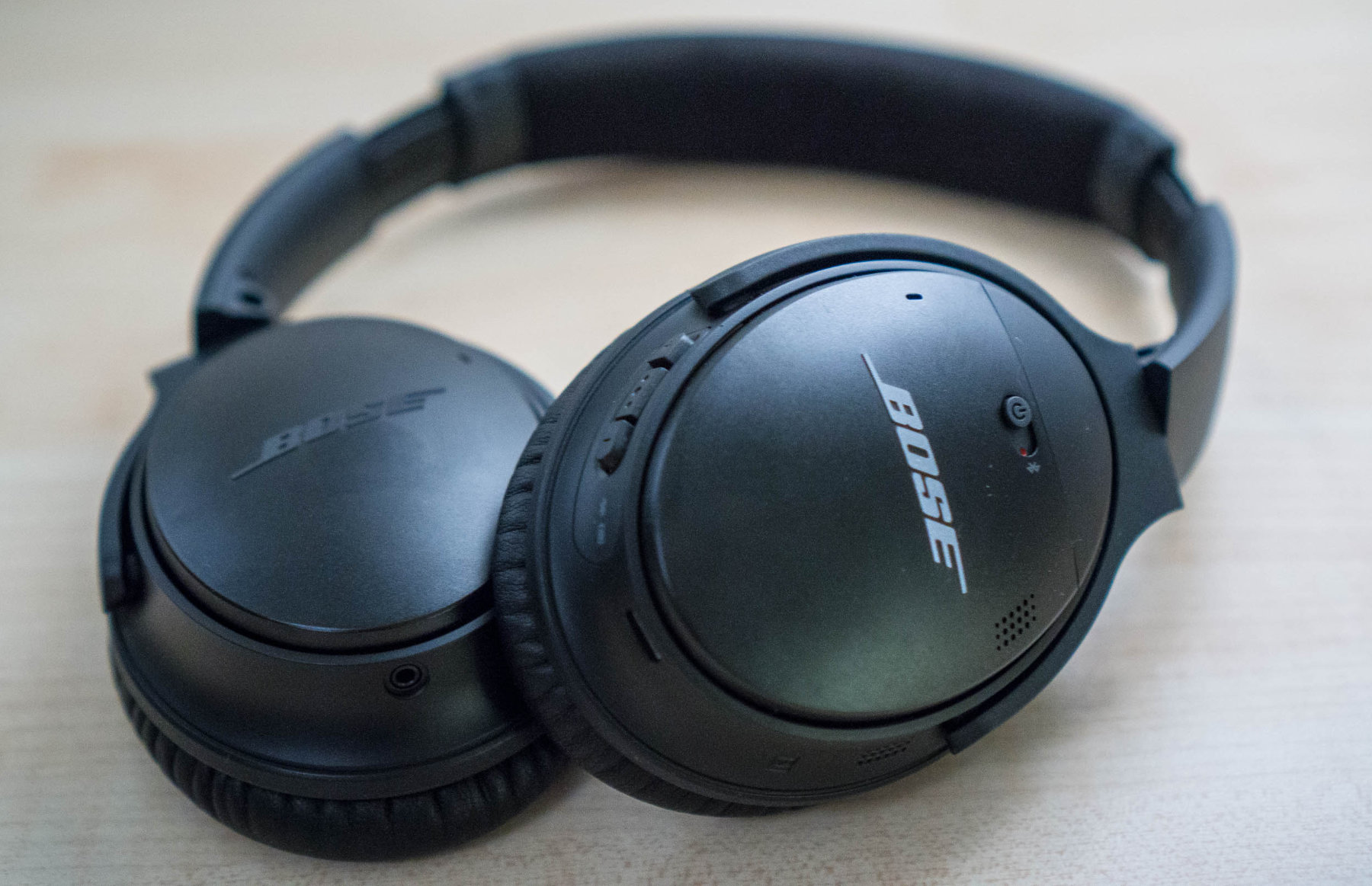 I picked the Bose. The missing multipoint support of the Sony and the therefore tedious change between devices was a dealbreaker for me. Initially I was afraid to be annoyed by the very neutral sound of the Bose, but after more than a week of constant use, there is no such thing.

The improved comfort of the QC 35 II over the BackBeat Pro has me wearing headphones for way longer periods of time than before. Also I use them for calls more often. Previously I would often use some cheap In Ears with a cable for calls, just for a better microphone quality to not-annoy the others on the call.

All in all I couldn’t be happier with my new headphones, but of course I’m curious what the next generation of headphones has to offer.